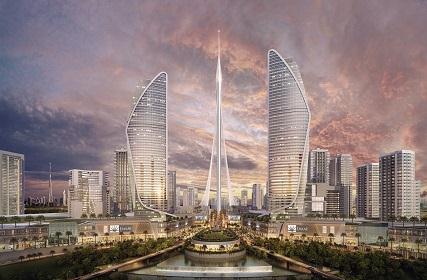 Recurring revenues from the shopping malls and hospitality businesses during Q1 2016 were AED1.555 billion ($423 million), 44% of the total revenue. International operations, led by the strong results primarily in Egypt among other markets, contributed AED499 million ($136 million) to revenue, a growth of 44% over Q1 2015 revenue, accounting for 14% of Emaar’s Q1 2016 revenue.

“The first-quarter results are a clear indicator of the growth we have achieved across all our three core businesses this year. Property sales in Dubai and other key international markets have gained momentum, a testament to our differentiating strength in offering the right property of choice for investors in premium locations,” says Emaar Properties chairman Mohamed Alabbar.

“We are building on this positive trend by developing premium projects in exceptional locations, especially in Dubai, to support the vision of His Highness Sheikh Mohammed bin Rashid Al Maktoum, UAE vice president and prime minister and ruler of Dubai, to establishing the city as a global leader in all sectors, complementing the preparations for the Expo 2020 Dubai. This is highlighted by the launch of the iconic new tower in Dubai Creek Harbour and the planned opening of Dubai Opera in Downtown Dubai this year. Both will serve as magnets for investors and visitors,” he asserts.

“We are also launching a new Retail District in Dubai Creek Harbour and expanding The Dubai Mall, in addition to rolling out 35 new hotels and serviced residences in Dubai and other international markets. The sustained recurring revenue from these assets will help create long-term value for our stakeholders,” Alabbar adds.