US retail sales, hiring to pick up pace, says NRF 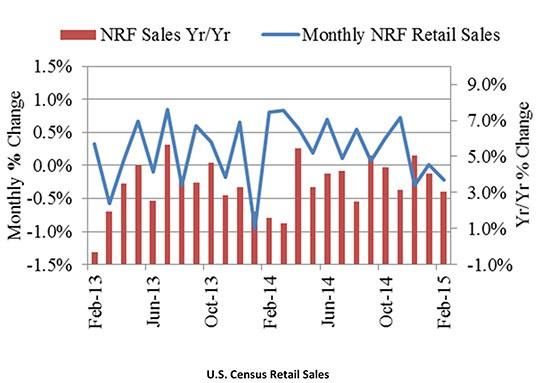 According to National Retail Federation (NRF), as of February retail sales grew at a 4.1% pace on a three-month moving average on a year-over-year basis and faster than the 2.2% for the same three months in 2013. However, in the same month retail sales declined 0.2% seasonally-adjusted month-to-month. Adverse weather conditions played spoilt sport causing weak sales performance.

Retail employment on the other hand is gaining traction. While 23,900 jobs were created in February, March saw an addition of 23,100 jobs. Retailers have added an average of 23,000 jobs a month since the beginning of this year. The US Department of Labour reported a gain of 126,000 jobs in March, which is below expectations of 247,000. While the unemployment rate remained unchanged at 5.5%, hourly wages witnessed solid growth rising 2.1%.

“Retailers certainly helped keep the March jobs report afloat with the solid payroll additions that companies contributed; with the arrival of spring and busy months ahead, there’s a good chance retailers will continue to help pave the way for improvements in economic activity.”

The retail hiring rate for the last two months was 3.7%, while the separation rate picked up in January increasing to 6.4% from 5.3% in December 2014. The unemployment rate for the retail industry declined from 6.7% to 6.1%.