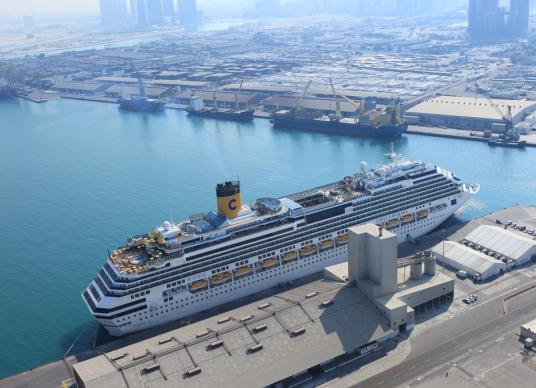 Abu Dhabi Ports Company (ADPC) – the master developer and manager of both commercial and community ports, and the Khalifa Industrial Zone Abu Dhabi (Kizad) – has announced the next steps in its plans to support the growing cruise business at Zayed Port, Abu Dhabi.

Figures for 2012-13 indicate a total of 96 vessel calls and 155,000 passenger visitations at Zayed Port, Abu Dhabi last season. Increasing the cruise business to the city is one of Abu Dhabi’s main tourism-related targets and Zayed Port has more capacity now that all container traffic is handled through Khalifa Port. However, the existing cruise liner facilities at Zayed Port offer little room to handle the projected growth. To address this, ADPC has allocated the south-eastern end of the port berth, the end closest to Sheikh Khalifa Bridge, as an area to be developed specifically for cruise liners and passengers. The new space will offer an immediate increase in capacity for the forthcoming season and space for further expansion in the future.

“For more than 40 years, Zayed Port was the major lifeline for Abu Dhabi’s import/export trade, making it a vital port in the region. Now that all container traffic has shifted to Khalifa Port, the first semi-automated facility in the Middle East, we are looking forward to maximising Zayed Port’s capacity, allowing us to focus on a growing cruise line business and reinforcing Abu Dhabi’s position as a world-class tourist destination,” says Mohamed Al Shamisi, acting CEO of ADPC.

The main focus for the new development will be a permanent state-of-the-art terminal building and a traditionally-themed souk and heritage area, with activities to entertain both passengers and the general public. Overseeing and managing the new development, ADPC has determined that the cruise liner terminal project will be divided into several phases. Phase one will be completed for the start of this season (October 2013), offering accommodation for two large cruise ships and one small vessel. The following phases will be developed as appropriate according to market potential and demand.