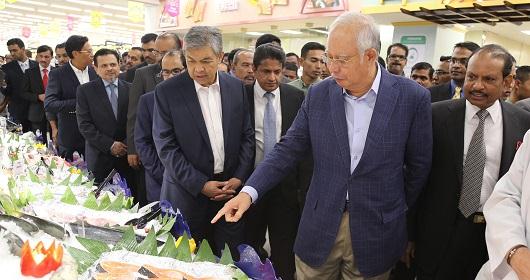 The Lulu Group had recently announced its plans to invest $300 million as part of its expansion and intention to set up 10 hypermarkets in the next five years in the country.

The new hypermarket is ideally located in the CapSqaure, Jalan Munshi area of Kuala Lumpur and is expected to be one-of-its-kind in the country. Spread over three levels, the new hypermarket combines everything from grocery and a variety of products to fashion, household and latest electronics gadgets. Hot, ready-to-eat food from around the world, fresh seafood and locally grown produce are some of the key highlights of the supermarket’s offering.

Speaking at the inaugural ceremony, prime minister Najeeb Razak welcomed the entry of the Lulu brand into Malaysia. “This will pave way for more international brands to come and invest in Malaysia. I am certain that Lulu will open many more hypermarkets and malls not only in Kuala Lumpur but also in other parts of Malaysia.”

“With an initial investment of $300 million in the first phase, we plan to open 10 hypermarkets by end-2021 and a central logistics and warehousing facility in Malaysia. These projects are likely to generate more than 5,000 job opportunities for Malaysians,” says Yusuffali MA, chairman, Lulu Group. “We also plan to set up contract farming to ensure continuous supply of high quality products and to support the Malaysian agriculture sector.”

“Today the whole world knows about Malaysia’s economic stability, investor-friendly approach, liberalised policies and world-class infrastructure and we are confident about our success here. Our hypermarkets encompass both supermarket and department store formats and we intend to bring a whole new world of shopping to the residents of Malaysia,” adds Yusuffali.

Apart from the 10 hypermarkets that are already planned, Yusuffali also announced the group’s plan for an additional $500 million investment in setting up the largest shopping mall in Malaysia.

During his official visit to the UAE in 2014, Malaysian prime minister Najeeb Razak had visited Lulu Hypermarket in Abu Dhabi and expressed his keen desire to have Lulu’s presence in Malaysia. He was especially impressed with the high standards of operations, quality and variety of products and service offered by Lulu.

The Lulu Group is currently one of the largest grocery retail chains in the Middle East and operates 126 stores across the GCC, Egypt, India and Indonesia. The group employs more than 38,000 people of different nationalities and is ranked by Deloitte as one of the top 10 fastest growing retailers in the world.