Sunset Hospitality Group, a Dubai-based hospitality investment and management company, has announced the opening of the region’s first Mood Rooftop Lounge in Dubai. Slated for opening in October 2019, Mood will deliver a new lifestyle experience to the city’s trendsetters, coupled with 180-degree views of the Dubai Downtown skyline.

Mood Rooftop Lounge will be set on the rooftop of the Meydan Hotel in Nad Al Sheba. Characterised by its swanky interiors and chic lounges, the adults-only venue will include an exotic garden lounge where guests can reconnect with their natural senses, while enjoying panoramic views. The menu specialises in refined dishes curated by the talented chefs. It also features a lounge.

“Dubai has beautiful hideouts in its skyline, and Mood Rooftop Lounge will allow guests to see the city from another perspective. The landscape of Dubai Downtown with the towering Burj Khalifa and the glittering evening sky will surely impress the guests as they relax, sipping on delicious drinks and nibbling on some canapes in the company of their friends or loved ones,” says Nazih Hafez, COO, Sunset Hospitality Group.

As part of its tenacious global expansion plans for the coming year and beyond, Sunset Hospitality Group will also open the first Sweet Chick – an American cult chicken and waffle restaurant – in London in Q4, as it works towards its goal of 24 operating venues by year-end. 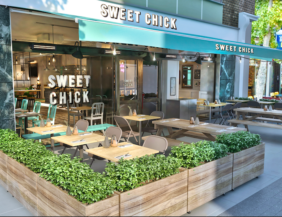 In this context, Hafez adds, “We are also proud to announce that we have acquired the license to operate the Sweet Chick brand in the Middle East and Europe. We will be opening the first London restaurant in the last quarter of the year, followed by plans to bring the brand to the UAE in the near future. This is a key achievement for Sunset Hospitality Group as we slowly realise our goal to grow the company into new markets such as the UK.”

Sweet Chick will open its first London restaurant in Oxford Circus, this autumn. Founded in Brooklyn by restaurateur John Seymour in 2013, and backed by rapper Nas, Sweet Chick currently serves its take on modern American comfort food across five locations in New York and Los Angeles.

The opening of Mood Rooftop Lounge and Sweet Chick are in line with Sunset Hospitality Group’s aggressive expansion plans in the Middle East and the UK. Currently, the Group is scouting for another location in Dubai to open the next Mood Rooftop Lounge, while discussions are also underway to establish the brand in Saudi Arabia and Bahrain. By April 2020, Sunset Hospitality Group will open the second Sweet Chick in Birmingham.

Founded in 2011, Sunset Hospitality Group currently operates 13 dining venues, two beach clubs and one nightlife spot across Dubai, Abu Dhabi, Kuwait, Bahrain and Geneva. It plans to open eight new outlets before the end of the year, taking its current portfolio of 16 venues up to 24.

Going from local to global