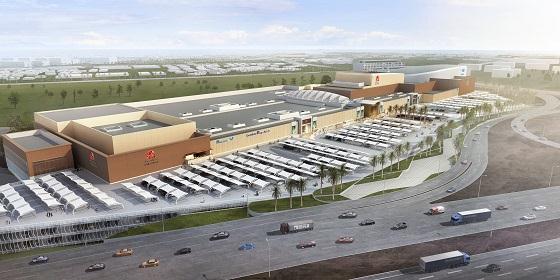 When it opens in 2020, the Mall of Oman will be the largest integrated retail, leisure and entertainment destination in the Sultanate. The super-regional mall will feature 350 outlets in a 1.5 million sqft retail space. It will feature many ‘firsts’ including Oman’s largest snow-park, with an 86,000 sqft play area, and a Little Explorers edutainment centre.

It will also include the Sultanate’s first Abercrombie & Fitch outlet and largest VOX Cinemas and Magic Planet, as well as a 142,000 sqft Carrefour hypermarket and 292-room hotel, completing its integrated offer. It is estimated that Mall of Oman’s development will generate 29,000 direct and indirect job opportunities.

City Centre Sohar, set to open in 2018, will be the largest shopping and lifestyle destination in its Governorate. The regional mall will be home to 100 new retail outlets across 430,000 sqft. These will include businesses owned and managed by Majid Al Futtaim, such as a 79,600 sqft Carrefour hypermarket, and entertainment options including VOX Cinemas and Magic Planet. The mall will create an estimated 8,000 employment opportunities in Oman.

My City Centre Sur, which will open in 2017, will be Majid Al Futtaim’s first community mall in Oman. The My City Centre retail concept, which was launched by Majid Al Futtaim two years ago, features a tailored mix of lifestyle-orientated retail and service outlets aimed at serving the everyday needs of local communities. My City Centre Sur will include 177,500 sqft of retail space, comprising 50 outlets, a 73,700 sqft Carrefour hypermarket, Oman’s first City Centre Clinic and a Magic Planet. The project will create more than 3,500 direct and indirect job opportunities.

“We have always been pioneering in the Omani market. We are proud to renew our commitment to be the leading GCC investor in the Sultanate through our $2.5 billion investments, which include the development of Mall of Oman, City Centre Sohar and My City Centre Sur, as well as additional investments from our retail, leisure and entertainment businesses. We look forward to completing our projects and seeing them deliver more great moments for everyone, everyday,” says Alain Bejjani, CEO of Majid Al Futtaim – Holding.

Majid Al Futtaim is also expanding its existing City Centre Qurum shopping mall in Muscat. The revamp will see the introduction of multi-brand retail concept Centrepoint as well as additional car parking spaces. Furthermore, the company is developing the next phase of Al Mouj Muscat, an oceanfront mixed-use destination, and expanding its VOX Cinemas and Carrefour hypermarkets to new locations across the Sultanate.