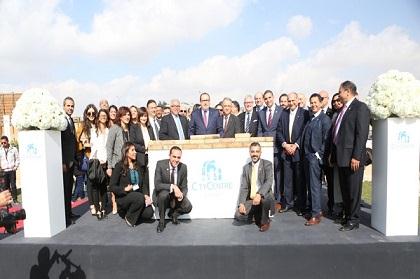 The project worth an estimated EGP4 billion is located in Cairo’s high-end suburb of Heliopolis on the north eastern quadrant of the junction between the Cairo-Suez Road and Nasr Road in Heliopolis. Projected to open in Q1 2019, City Centre Almaza will feature 1.1 million sqft of retail space offering over 300 of the best international and local brands as well as 23 restaurants, 18 food court outlets and nine cafés.

In addition to housing a unique retail mix of the leading international and local brands, City Centre Almaza will include a 140,361 sqft Carrefour, 16 state-of-the-art VOX cinema screens, a 19,375 sqft Magic Planet family entertainment centre and 4,000 parking spaces. The project is expected to create 22,000 direct and 14,000 indirect job opportunities.

“Majid Al Futtaim is a long-term investor in Egypt having made a significant investment in bringing unrivalled experiences to the country’s retail and leisure sectors since 1998. Our commitment to Egypt’s long-term sustainable development means that we are immensely proud to begin work on City Centre Almaza and deliver on our ongoing support to Egypt as it moves towards becoming one of the world’s leading economies,” says Bejjani.

“Being our second largest market after the UAE, Egypt’s importance to our business is reflected in the implementation of our EGP23 billion investment. Through this sizable investment we continue to expand our operations and hire Egyptians in alignment with the government’s growth and development goals. We see great potential in the economy and with the support of the government we expect many successful years to come for the communities we serve as well as our business. Together we will create great moments for everyone, every day in Egypt,” he adds.

City Centre Almaza is one component of Majid Al Futtaim’s massive investment plan in Egypt worth EGP23 billion, which also encompasses the undergoing developments of another two shopping malls – Mall of Egypt and the expansion of City Centre Maadi – in addition to four neighbourhood centres in new residential cities in Cairo and the development of four new shopping malls in greater Cairo.

“As we’re moving ahead with Egypt’s economic reform process, it is important for us to identify and work with experienced, committed partners. With its massive investment plan, coupled with sizable job opportunity creation, Majid al Futtaim is well positioned to play a significant role in the development of our country’s retail landscape and economy in general,” states HE Asharf Salman.

Majid Al Futtaim’s plan also includes expanding the network of Carrefour hypermarkets and supermarkets to 60 branches by end of 2019, and introducing the largest and first local VOX cinemas over the coming five years. Upon completion, this investment plan will have created a sizeable 144,000 direct and indirect jobs by providing significant employment opportunities for Egyptians.