Black Friday sales in the UK may grow modestly 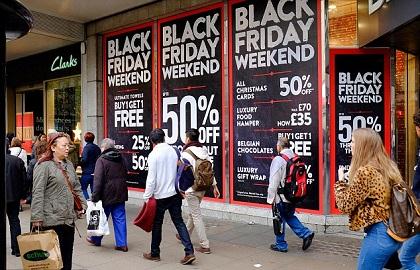 With Black Friday gaining popularity and becoming nearly as chaotic in the UK as in its native US, British retailers are undertaking several strategies to ensure a more successful promotion for the holidays says a new report from Fung Business Intelligence Centre Global Retail & Technology (FBIC), a think tank that follows emerging retail and tech trends.

While some UK retailers are increasing warehouse space, others are spreading promotions over a longer period and still others simply have cut back on the number of promotions to avoid the long waits and disruptions that took place in 2014, observes FBIC executive director Deborah Weinswig.

However, uncertainty remains as the UK consumer awaits the government’s Autumn Statement, which is likely to reveal cuts in state benefits as well as tax increases. Sales should increase modestly year-over-year compared with last year’s 9% gain, FBIC predicts.

“With the event remaining so new in the UK, with uncertainty over what the government will announce in its Spending Review and Autumn Statement, and with some retailers indicating they want to pull back from Black Friday, growth is difficult to forecast with certainty,” Weinswig indicates. “While there may be headlines about record one-day sales growth, we reiterate our expectations of a softer year-over-year increase in sales.”

Founded in the US on the day after Thanksgiving, Black Friday has historically kicked off the holiday selling season (and was named so because it was the day stores theoretically went into the black for the year). Amazon is credited with introducing the concept to the United Kingdom in 2010, with Asda and John Lewis joining the fray in 2013. However, when more retailers including Argos, Currys and ao.com launched their own promotions in 2014 and overall demand increased, chaos ensued, with websites crashing, delays in delivery, shoppers brawling in stores and more.

In response, ao.com and Tesco have increased preparations, with the former upping warehouse space and the number of delivery vans, and the latter opening stores later. River Island and Argos have extended their promotion periods. . Further, more brands are planning to participate, including Zara, Massimo Dutti and Halford’s. On the other hand, Oasis has cut the number of its promotions, while Asda has dropped out entirely.

However, in the long-term the bad news for retailers is that shoppers could come to expect deep discounting and simply put off purchases until the holiday, eating into sales and profits, as has happened in the US.

“Black Friday brings UK retail closer to the US model, where department stores and clothing retailers are on near-perpetual promotion, and where shoppers appear resistant to paying full price. Once shoppers become accustomed to frequent discounting, the path back to full-price sales can be challenging. Consumer expectations of below retail prices are Black Friday’s longer term and deeply negative consequences,” cautions Weinswig.

Retail sales in the US over the Thanksgiving weekend might be a little soft because consumers had already begun shopping, indicates FBIC.

A combination of consumer behaviour and month-long promotions has led to consumers getting an early start. The National Retail Federation reports that a record 56.6% of holiday shoppers had begun their buying by early November this year, up from 54.4% last year. Combined with a backlash against some retailers opening on Thanksgiving, Black Friday as a whole is becoming less of an indicator for the overall season.

While Black Friday weekend sales declined 11.3% year-over-year in 2014, overall retail spending in November rose 5%. In fact, a number of retailers including Costco, Home Depot, T.J. Maxx and Sam’s Club are reversing the trend of opening on Thanksgiving Day, and REI will not open on Black Friday at all.

Economic fundamentals bode well for the season, with gas prices down 27% from 2014 giving an average of $700 of additional income to US households, per capita disposable income up 2.8% and unemployment at a seven-year low. The weather largely is cooperating as well, with cold and dry conditions in the west driving demand for seasonal goods, while dry but warmer weather in the East will support foot traffic.