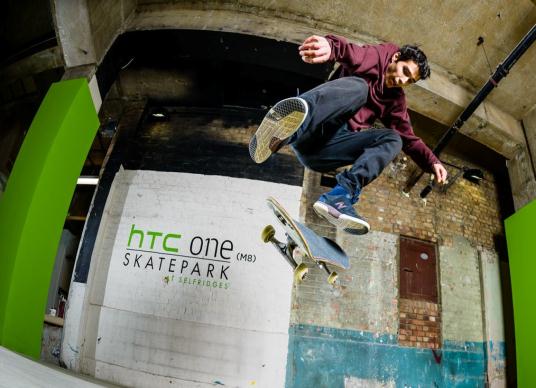 For four weeks this spring, the Old Selfridges Hotel adjacent to the Oxford Street store will be transformed to offer an exhilarating new in-store experience as part of Selridges’ Board Games campaign, a spring scheme that celebrates the cult of skate and surf.

The 18,500 sqft bespoke park brings together two unique skateboarding concepts. The first space within the skatepark showcases identical replica to scale of seven iconic London street skating spots – like the Big Ben Road Gap, parts of the Southbank’s Undercroft and the Shoreditch blocks. The second imagines a fantasy store interior where hero products from Selfridges – including a lipstick, sunglasses and giant Selfridges carrier bag – become skateable objects. These obstacles, especially the lipstick, are arguably the first skating obstacles of this kind to be created.

The skatepark will welcome the core skate community and new recruits alike, and encourage people to celebrate and enjoy the craft, culture and importance of skating in London and the UK today. HTC will be showcasing the image-capture capabilities of its leading HTC One handsets at the skatepark, including its Zoe Highlight functionality to combine video and stills of skate experiences to create socially shareable content.

“The energy, authenticity and freedom of skate culture have inspired our first fashion scheme of the year – Board Games. We are very proud to be able to offer skaters the freedom to discover a completely new London skatepark as part of the concept. What better way is there to bring our Board Games vision to life,” says Sebastian Manes, buying director, Selfridges.

“London is the city that skateboarding calls home in the UK. It’s always had a thriving scene and has been able to adapt through the highs and lows of its popularity. Due to its progressive nature, skating has inadvertently become a key fashion and lifestyle influence over the last 4+ decades, but is rarely influenced by it. Skateboarding carries with it a lifestyle that is equally at home in a purpose built West End skatepark as it is in the urban back streets of London,” says Phil Young, skateboarder and creative Director at Prime & Fire, the action sports agency that delivered the The HTC One Skatepark.

“We’re committed to bringing stunning design experiences to everything HTC does – whether that’s our handsets or to new experiences where our customers can put those phones to the test. Working with the team at Selfridges has meant we’ve been able to create what we think is the city’s most perfectly designed skate experience – a miniature version of London’s best street spots,” says Ben Walsh, head of marketing for UK & Ireland, HTC.

Next DSF returns for six weeks

Comfort and safety are top priorities for Global Village

Comfort and safety are top priorities for Global Village, the region’s much-loved

As part of a joint venture Eagle Hills and Emaar Entertainment, Bahrain’s