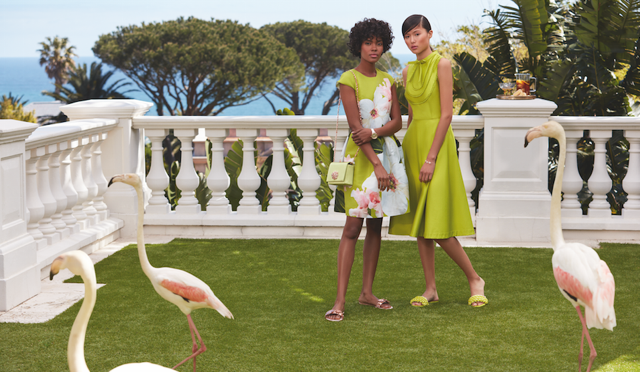 British luxury fashion brand Ted Baker will open a brand new 2700-sqft store at the Dubai Marina Mall, marking its fourth outlet in Dubai. The new store will be an extension, merging its previous two stores into one larger destination for men and women.

Taking references from the renowned Ras Al Khor Wildlife Sanctuary, Ted Baker transforms its Dubai Marina Mall store with a flamingo takeover and a nod to the iconic London skyline. Further paying homage to the brand’s British heritage, it has also introduced London’s ubiquitous pigeons into the design, encouraging all guests to live as ‘a pigeon in a flock of flamingos’.

Quirkiness is in Ted Baker’s DNA, with each store being unique to its local customs, tradition and culture; Dubai Marina Mall is no different. The new store houses a shopfront tiled with pinks and greys, referencing the colours of flamingos and pigeons commonly found in both countries. Herringbone flooring continues throughout the store where parts of the pattern will disperse, creating the impression of feathers on the wind. Bird cage lights are suspended from the ceiling and, to juxtapose both cultures, the store is laden with British-style furnishings, including park benches and lamp posts.