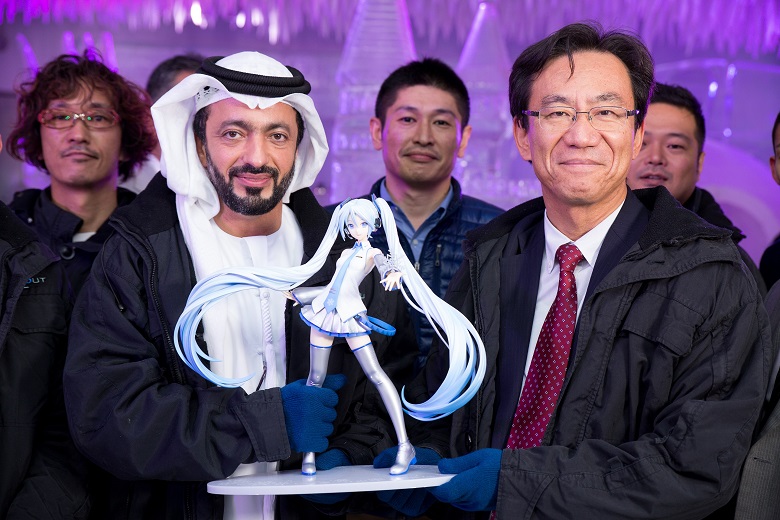 Chillout Ice Lounge, a Sharaf Group venture through Sharaf HQ Investment, recently partnered with Japanese firm Crypton Future Media, Inc. to introduce ‘Snow Miku’ – a character associated with and celebrated for enlivening winters in Hokkaido, Japan – to the UAE. Chillout Ice Lounge will be the first establishment in the Middle East to incorporate Snow Miku into their service offerings.

Launched in 2007 Chillout Ice Lounge combines the novelty of sub-zero temperatures in the Middle East with unique interior designs. The Ice Lounge has incorporated world-class technological innovations in refrigeration, lighting and architecture which combine ice, glass and steel.

Having built a popular base among residents in the UAE, and tourists from the GCC, Middle East and the world-over, Chillout Ice Lounge is now taking a technological approach to its entertainment offerings. In the wintery spotlight at the lounge is Snow Miku.

Snow Miku first created at the Sapporo Snow Festival 2010, Hokkaido, is based on the first snow sculpture of the popular Hokkaido-born virtual singer Hatsune Miku. Hatsune Miku, which means ‘the first sound from the future’ is a humanoid persona voiced by Piapro Studio, a singing synthesizer VSTi Plugin, developed by Crypton Future Media, Inc and Yamaha Corporation’s Vocaloid2 and Vocaloid3 singing synthesizer technologies. Hatsune Miku has performed onstage at concerts as an animated projection.

“Hatsune Miku and her counterpart Snow Miku, we believe, will be liked by people in the UAE and tourists from the GCC, Middle East, Asia and elsewhere. Additionally, Hatsune Miku’s songs will be played along with images of snow and winter from Hokkaido, which will provide more entertainment and activity for our customers. Furthermore, the new ice design and Snow Miku dolls will greatly enhance the ambience and décor, and all of these features combined will contribute to an improved customer experience at Chillout Ice Lounge,” says Farhan Al Bastaki, CEO, Sharaf HQ Investments and owner of Chillout Ice Lounge.

Being aware of Dubai’s prominence as a tourist destination, having attracted over 14 million tourists in 2015 and ranking as the 4th most visited city in the world, Crypton Future Media owning the intellectual property rights for both Hatsune Miku and Snow Miku, expect the introduction of their characters to increase awareness of their technological know-how and lead to new business opportunities.

“Through this project, we hope to firstly introduce Hokkaido to the UAE and the tourists that visit Dubai. Secondly, we also expect to indirectly create an interest and boost more business opportunities for companies in Japan and Dubai,” add Crypton Future Media representatives Mayu Suzuki and Kimitaka Nishio.

Dubai to have a LEGO-themed hotel

In tune with the times

Fashion industry can build back better with technology

We reset our business to make Splash future-fit