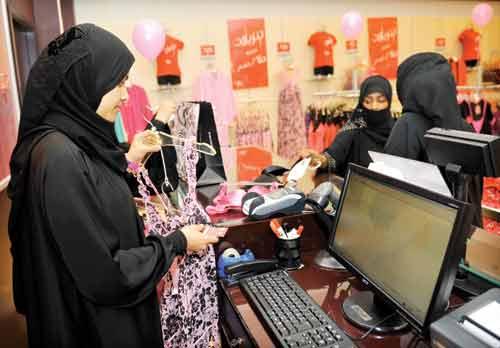 Clothing retailers in Saudi Arabia are finding it difficult to find Saudi women to work in their stores. The retailers are also complaining that several Saudi women are not eager to work stipulated hours and shifts at abaya stores.

Earlier this year, Saudi Arabia passed a law to replace salesmen, mostly expatriates, with local saleswomen, in retail stores selling products related to women. The new law was expected to create 44,000 jobs for Saudi women, and decrease the unemployment rate among Saudi women, which stands at around 30%.

But within few months of the legislation being passed, clothing retailers are seeking more financial support from the Government’s Human Resources Development Fund, as well as in training workers.

“The JCCI’s committee on textile and clothing supports the decision to employ women in Saudi Arabia’s retail sector, but shopkeepers are finding it difficult to hire trained saleswomen. Most abaya and clothing accessories shops in Saudi Arabia generally work in two shifts and women employees do not favour this type of working schedule. If salaries are raised to motivate women workers, then it would result in increase in prices,” says Mohammad Sultan Al-Shahri, president of the textile and clothing committee at the Jeddah Chamber of Commerce and Industry (JCCI).