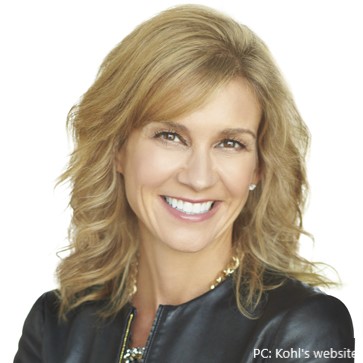 The National Retail Federation (NRF) will name Michelle Gass, CEO of American department store retail chain Kohl’s as “The Visionary.” This is an award given each year to an outstanding leader in the retail industry. The award will be presented during the sixth annual NRF Foundation Honors on January 12, 2020, in New York City.

“In today’s competitive and evolving retail landscape, companies need leaders who are willing to take risks to make more meaningful, personal connections with their customers,” said NRF president and CEO, Matthew Shay. “Michelle has cultivated an environment at Kohl’s where risk-taking is encouraged, which has never been more important than in today’s dynamic retail environment. Her extensive retail experience and instinctive understanding of what customers want has already solidified her reputation as a transformative leader, and we can’t wait to see what she does next.”

The Visionary award is presented each year to a retail executive with a proven track record of spearheading change in the industry. Earlier this year, prominent retail executives were asked to identify an individual who has changed and continues to transform the retail landscape in a positive way. Gass was selected for her success in driving momentum in the Kohl’s business and fostering a culture of innovation and inspiration among Kohl’s associates. As the company’s first female CEO, Gass has led Kohl’s focus on becoming an active and wellness destination, launched Kohl’s new loyalty programme and is responsible for bringing in new categories, partners and brands – from Amazon to Under Armour.

“It’s a tremendous honour to be recognised by NRF,” Gass stated. “I’m incredibly proud of our Kohl’s associates who work hard each day to deliver greatness for our customers, and who are driving our business priorities for our long-term growth. It’s a transformative time in retail, and we’re excited to come to the table with new and innovative ideas that fuel the future of our company and retail industry.”

Gass joined Kohl’s in 2013 as chief customer officer and was named chief merchandising and customer officer in 2015. She was promoted to CEO-elect in October 2017 and assumed the role of CEO in May 2018. As CEO, Gass is responsible for Kohl’s overall strategy and operations, overseeing more than 1,100 Kohl’s stores in 49 states, Kohls.com and 130,000 associates nationwide. Gass is driving an ambitious plan for growth, forging new partnerships with innovative players like Amazon, Nine West, Elizabeth and James, LEGO, Under Armour, Aldi and Planet Fitness. She is also positioning Kohl’s as a leading omnichannel retailer – building out the company’s digital capabilities, omnichannel operations and online growth. Gass has championed innovative thinking and bold initiatives at Kohl’s and is transforming the company’s culture to embrace new ideas that excite customers and allow the company to thrive throughout the dynamic times in retail.

Prior to Kohl’s, Gass spent more than 16 years at Starbucks Corporation, holding a variety of leadership roles across marketing, global strategy and merchandising, including president of Starbucks Europe, Middle East and Africa. Gass has more than 25 years of experience in the retail and consumer goods industries.