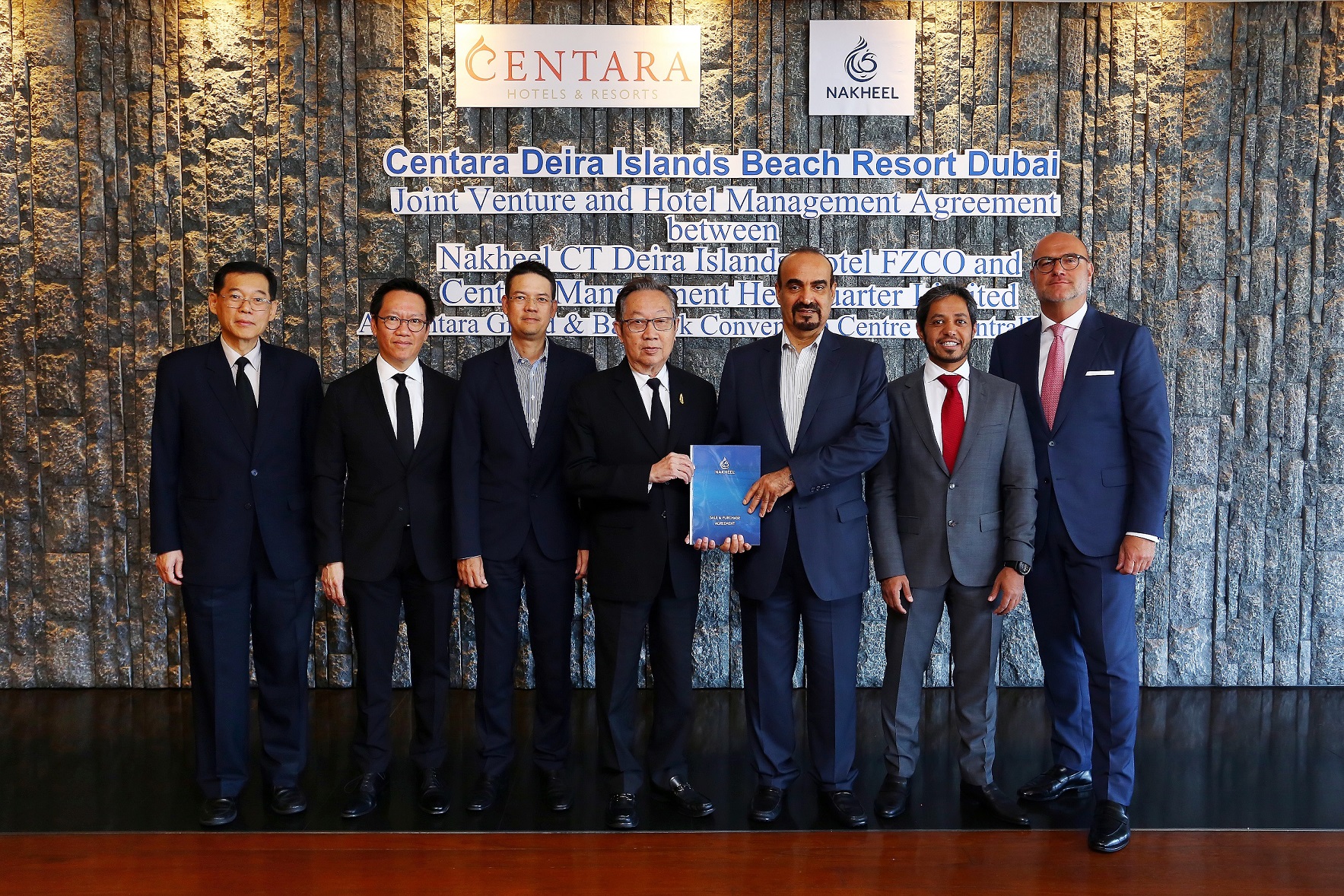 UAE-based master developer Nakheel and Thai hotel group Centara Hotels & Resorts have reached a key milestone on their 600-room beachfront resort and waterpark at Dubai’s Deira Islands, with the official formation of the joint venture company and the signing of a management agreement.

The joint venture was cemented by Nakheel chairman Ali Rashid Lootah and Centara chairman of the board Suthikiati Chirathivat at a signing ceremony at Centara’s headquarters in Bangkok. The project will deliver a family-centric lifestyle destination at Deira Islands, Nakheel’s new 15.3 sqkm waterfront city that is set to become Dubai’s newest tourism hotspot.

The resort will also be managed by Centara, whose portfolio already includes over 14,000 room keys across 67 hotels and resorts in Asia, Indian Ocean and the Middle East.

Set to open in 2020, the resort is the first Centara establishment in the UAE and will cover an area of almost 300,000 sqft. Features will include a waterpark, multiple restaurants including alfresco rooftop dining options, kids’ club, spa and fitness centre and business facilities. Recent enhancements to the hotel’s design have added 50 rooms to the original plan, bringing the total number of keys to 600.

“This strategic joint venture underlines our commitment to bringing new hospitality concepts to Dubai in line with the government’s tourism vision. Today’s crucial milestone allows us to move forward with the construction and delivery of this exciting new resort, which will undoubtedly be one of Dubai’s most sought-after destinations for travellers the world-over,” says Lootah.

“The official formation of the joint venture company and signing of the hotel management agreement is the natural next step following the joint venture agreement last December. This is the rubber stamp that paves the way for the finalisation of the design and development of our first resort in the UAE. With Nakheel’s development expertise and Centara’s record of delivering best-in-class hospitality and inspiring extraordinary guest experiences, we will create a unique resort that surprises and delights guests for years to come,” adds Chirativat.

The master developer’s AED5 billion hospitality expansion will see the delivery of 17 hotels, resorts and serviced apartment complexes, with almost 6,000 rooms and hotel apartments between them, across Dubai. The first two hotels, at Dragon Mart and Ibn Battuta Mall, opened last year, with the rest under construction or development.

Deira Islands, where Nakheel has already invested over AED7.5 billion in infrastructure and construction contracts, will add 40 km, including 21km of beach, to Dubai’s coastline. The coastal city, which is expected to have a population of 250,000 and to create 80,000 jobs, will feature hundreds of hotels, residences and retail and leisure attractions, including a diverse range of projects by Nakheel itself. Among them is Deira Central, the nine million sqft heart of the islands boasting 50 mixed-use towers, Deira Mall and two mosques, all set in extensive parkland. Nakheel is also building Deira Islands Night Souk and more hotels and resorts at the islands.