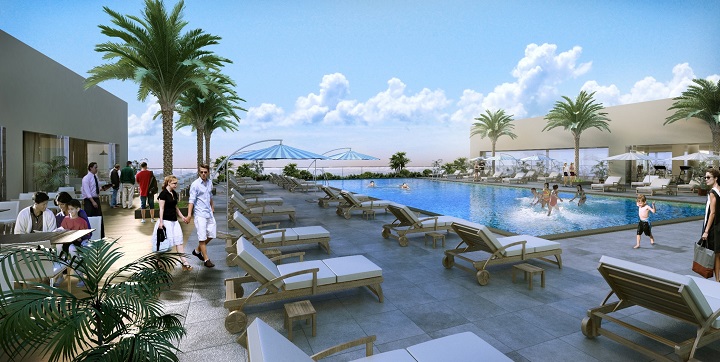 Dubai-based developer Nakheel is creating a new community club at Jumeirah Village Circle (JVC) by adding a pool, sports and restaurant complex to the roof of the upcoming The Circle Mall – Nakheel’s 400,000 sqft retail, dining and entertainment hub, currently under construction.

Due to open in 2018, the JVC Club will feature a 300-seater restaurant, a swimming pool and sundeck, two tennis courts, a gymnasium and landscaped gardens, all with views across the main community park.

“Nakheel continues to enhance its communities across Dubai with facilities that people want and need. Our new sports and social club at JVC will be a superb new feature at The Circle Mall and hugely welcomed by residents and investors,” says a Nakheel spokesperson. “At JVC there is already an emphasis on health, wellbeing and outdoor space, with 33 landscaped parks with jogging tracks and children’s play areas, spanning 4 million sqft in total. The new club will further promote sports, fitness and social interaction at this rapidly-growing community.”

The Circle Mall complex, due for completion next year, will have 235 shops, restaurants and entertainment outlets across three floors. Among them are multi-screen cinema, Spinneys supermarket and a Faby Land family entertainment centre. There will also be a host of fashion, home and electronics stores and a wide range of cafés and restaurants. The mall complex also includes a mosque that can accommodate up to 300 people.