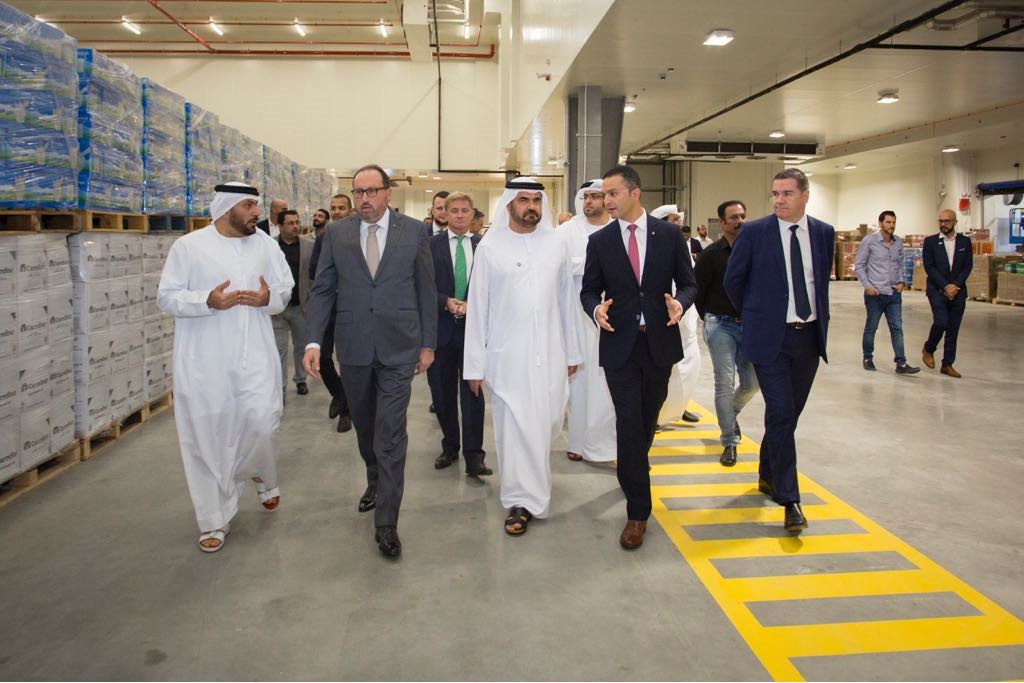 The facility is four times larger than any of Carrefour’s previous distribution centres in the region and represents a substantial investment of AED300 million by Majid Al Futtaim, which comes as part of its AED30 billion investment plan for the UAE, announced in 2016.

The Regional Distribution Centre, which took less than 12 months to construct, is the latest milestone supporting Carrefour’s ambitious regional growth plans and is critical to Carrefour’s ongoing determination to serve its customers with the freshest produce available at the best value prices. The Centre is now the central receiving and quality control point for all fresh food and other items, either sourced locally or imported into the UAE, to be sold by Carrefour. Goods received will go on to be redistributed to Carrefour’s 90 stores in the UAE, to Dubai or Abu Dhabi-based customers who have made online bookings via Carrefour’s website or mobile application, or on to the regional network of Carrefour stores that Majid Al Futtaim operates.

The site has been strategically located for its convenience to both Jebel Ali Port and Al Maktoum International Airport, both of which are reachable by road within 20 minutes.

With the latest technology in logistics and warehousing, Carrefour’s new Regional Distribution Centre has been designed around maximising the freshness and quality of fruits, vegetables and meat, and speeding up the time that imported fresh food reaches Carrefour customers. Inside the Centre, there are seven temperature zones, ranging from 0-2 degrees Centigrade to 25 degrees, designed to ensure food is stored in the optimum temperatures to preserve its freshness. The Centre is expected to process 42 million cases of products each year, handling more than 100,000 orders per day and storing up to 200,000 items at a time.

Carrefour’s new centralised ability to consolidate imports for redistribution around the region will also benefit customers in other markets operated by Majid Al Futtaim by giving them easy access to a wider range of products not historically available in their locale.

Notably, the Regional Distribution Centre has been built to exacting environmental standards. The building uses 50% less energy than conventional buildings and 25% of the power needed will be generated by rooftop solar panels installed later this year, allowing the Centre to create its own renewable energy sources and save the company an expected AED1.5 million per year. This represents one of the largest known percentages of renewable energy generation of any building in the region.

Plans are already in place for a future expansion of the Centre, which will see the creation of a fully automated extension facility, manned by the latest in retail industry robotics.

“The Carrefour Regional Distribution Centre represents the future of grocery retailing logistics. We are investing heavily into cutting edge infrastructure that will serve us not only today but well into the future, supporting our ambitious growth plans. This is the largest centre of its kind in the region and one that we will continue to invest in and expand, as our operation grows further,” says Hani Weiss, CEO, Majid Al Futtaim Retail

Younis Al Mulla, senior vice president for business development at Majid Al Futtaim Retail, paid tribute to the many hundreds of people involved in the development of the Distribution Centre, adding “It would not have been possible for us to have achieved so much in so little time without the full support of our government and other partners. It is thanks to them that we stand here today with a fully operational centre which is aligned to Dubai’s vision for the future.”