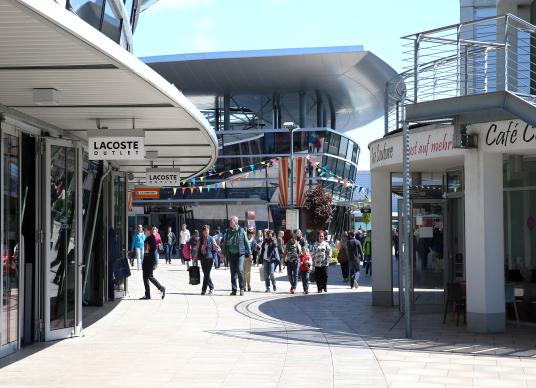 Europa Capital, on behalf of Europa Fund III, and its partner Outlet Centres International have signed a landmark lease with the US fashion house Abercrombie & Fitch (A&F) at Designer Outlets Wolfsburg (DOW) – in Wolfsburg, Germany. A&F now has over 300 stores worldwide and has had a presence in Germany since 2011 where it currently trades out of three flagship full-price stores located in Dusseldorf, Hamburg and Munich. This new lease at DOW represents A&F’s first outlet store in Germany and only its third outlet store in Europe.

The first phase of DOW was completed in 2007. It was fully leased at the time of Europa’s investment and has enjoyed strong year-on-year turnover growth. The second phase, completed in December 2013, increased the trading space to 188,368 sqft, which includes new brands – Michael Kors, O’Neill and Clarks – for the centre alongside A&F. With a permit in place for further expansion to 231,424 sqft in the third phase, DOW will be one of the larger outlet centres in Germany. It already houses several global brands including Adidas, Diesel, Escada, Gant, Lacoste, Nike, Polo Ralph Lauren and Tommy Hilfiger.

“This new lease with A&F is exciting not just for DOW but for the German outlet market as a whole, being the retailer’s first outlet in Germany. We have 100% of this second phase either leased or in exclusive lease negotiations and are now opening discussions with interested tenants for DOW’s phase three,” says Stephan Schaefer, head of leasing at Outlet Centres International.

“Wolfsburg as a city has a very strong economy and a community that is very pro-active in encouraging inward investment. The strength of covenant and number of tenants interested in leasing space underlies the location’s strength and pulling-power for this form of retailing,” comments Tom Vail, Europa’s head of asset Management for Germany.