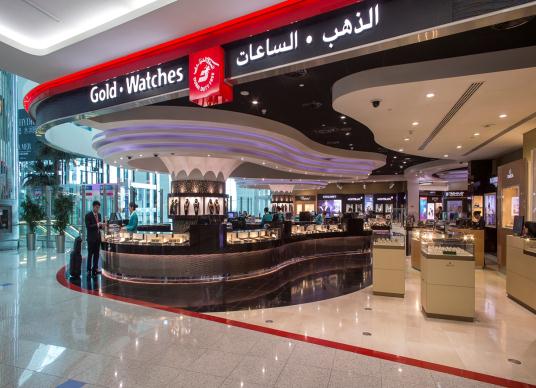 DDF’s December sales set a new monthly record of $192 million. On the 30th anniversary of DDF on December 20, when customers were offered a 30% discount on a range of products, DDF recorded 215,000 transactions, a new daily sales record of $30.65 million in the 24-hour period, which was 40% higher than the former anniversary day in 2012.

From a category point of view, perfumes retained its position as the best-selling category with an increase of 16% year-on-year. Sales of perfumes reached $289 million, an increase of over $41 million over the previous year. Perfumes now contribute 16% towards total sales at Dubai Duty Free sales. Liquor and gold categories followed with gold recording sales figures of $168 million representing an increase of 5% year-on-year.

Confectionery jumped to the fifth position which increased by 12% to $142 million for the year. Other steep increases were seen in watches which rose by 16% to $126 million, cosmetics rose by 20% to $122 million and delicatessen sales rose by 13% to $82 million. Gifts from Dubai and handbags & leather goods categories have seen an increase of 22% and 46% increase in 2013, respectively.

Moreover, sales in DDF departures rose by 11% while arrivals sales have shown a 13% increase over last year.  Terminal 2, which completed its renovation in December, recorded a 22% increase in sales.

In addition to a remarkable turnover, 2013 provided DDF with major milestones in terms of growth and expansion including the opening of Concourse A, dedicated to Emirates airline fleet of A380s, and the opening of the passenger terminal at Al Maktoum International Airport, collectively providing DDF with over 300,000 sqft of retail space.

“We are thrilled to announce such a positive year in 2013, which marked our 30th anniversary. The operation went from strength to strength with the opening of Concourse A in Terminal 3 in January and Al Maktoum International in October, with overall sales soaring to a new high. I thank our Chairman, HH Sheikh Ahmed bin Saeed Al Maktoum for his ongoing support and I join His Highness in thanking our great team of staff, our suppliers and of course our customers, who are fundamental to our continued growth,” says Colm McLoughlin, executive vice chairman, DDF.