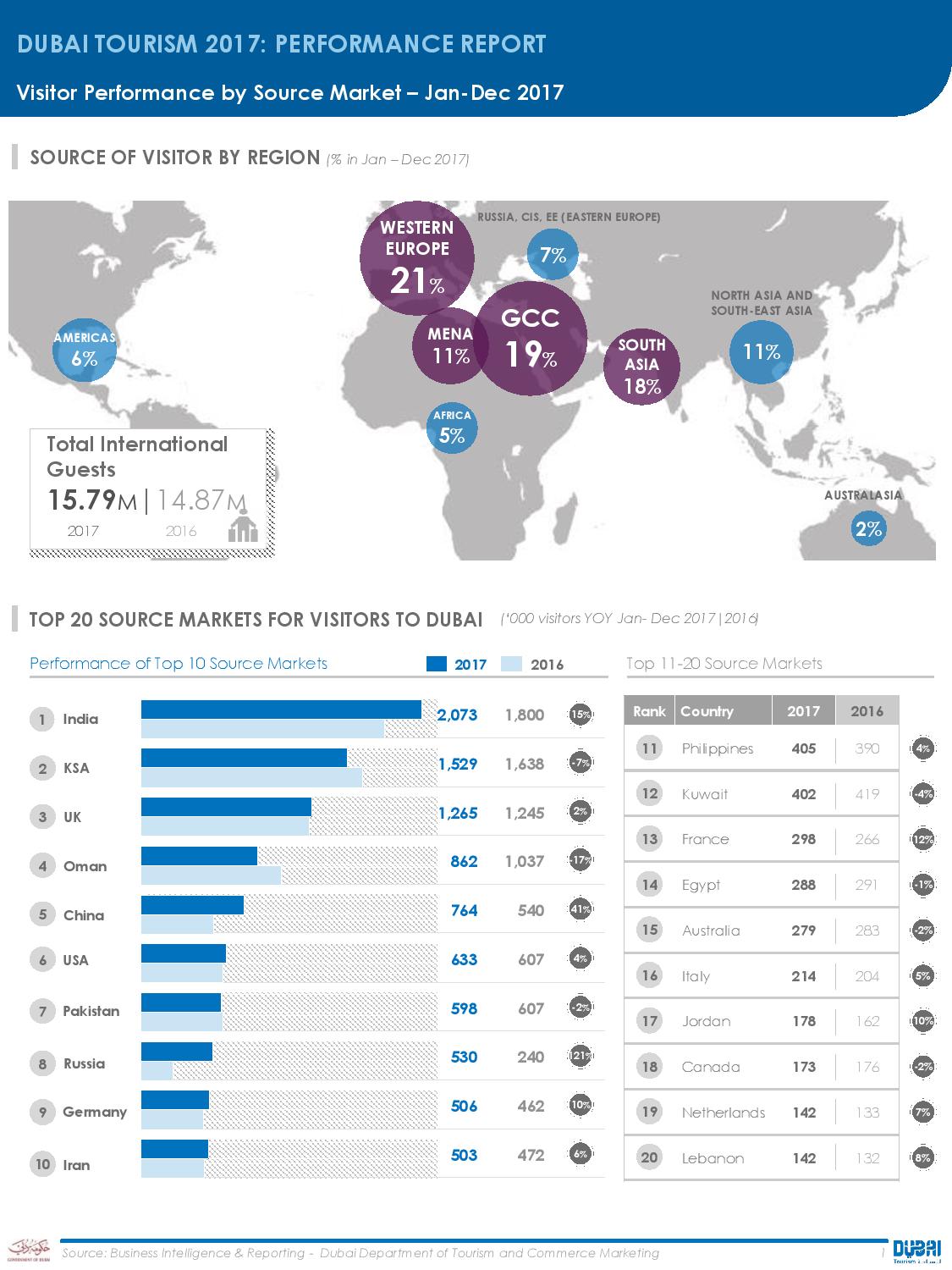 In 2017 Dubai recorded a strong 6.2% year-on- year increase in international overnight visitation, surpassing the 5% growth witnessed in the previous year and propelling the emirate’s momentum towards its 2020 goal of welcoming 20 million visitors per year by the start of the next decade.

According to the latest data published by Dubai’s Department of Tourism and Commerce Marketing (Dubai Tourism), a total of 15.79 million tourists visited Dubai last year, setting a new record for the emirate and underlining the sustained strength and resilience of its travel and tourism sector.

Commenting on the annual performance, Helal Saeed Almarri, director general, Dubai Tourism, states, “Under the visionary leadership of His Highness Sheikh Mohammed Bin Rashid Al Maktoum, vice president and prime minister of the UAE and ruler of Dubai, the emirate has continued to capture share of the global outbound travel market, complemented by a significant increase in tourism-driven economic contribution to the country’s GDP. Our strong 6.2% growth in 2017 has allowed us to ramp up the pace towards meeting our 2020 targets, and today Dubai’s travel and tourism sector is not only well positioned to offer a superlative destination experience across its eight core strategic propositions, but also geared to accelerate its appeal to the diverse and evolving needs of our global travellers.”

“With Dubai firmly consolidating its position as the fourth most visited city globally, we remain confident that our performance, backed by the continued strength of our partnerships across government and private sector stakeholders, will enable us to successfully attain our goals of becoming the #1 most visited city as well as being the most recommended with the highest number of repeat Dubai loyalists,” he adds.

In terms of country-specific performance, India retained top spot in 2017, contributing 2.1 million visitors, becoming the first country to cross the 2-million mark in a single year. The country’s performance represented a 15% year-on-year increase.

Saudi Arabia maintained its second rank, contributing a total of 1.53 million tourists last year. Despite an overall 7% year-on- year drop in visitation, it remained the highest driver of traffic volumes from within the GCC.

At the third place, the UK, delivered 1.27 million travellers, rising 2% over 2016, underscoring Dubai’s enduring popularity among British travellers despite lingering uncertainty surrounding Brexit that has impacted overall outbound travel growth from this market.

Impressive results from some of Dubai’s remaining top 10 source markets for inbound tourism included fifth-placed China with 764,000 tourists, up 41%, while eighth-placed Russia with 530,000 visitors, recording a stellar 121% increase over the previous year. Both markets benefited from easier access following the introduction of visa-on-arrival facilities to Chinese and Russian citizens in late 2016 and early 2017, respectively.

With increased contributions also from the US, Germany and Iran, at 633,000, 506,000 and 503,000 visitors, respectively, collective gains across all of these markets helped mitigate the decline in visitation observed from some of the regional markets like Oman and Pakistan.

Western Europe replaced the GCC as Dubai’s main regional source market with a 21% share, contributing more than 3.2 million travellers, up 5.5%. Although last year’s top performer ended 2017 in second place, the GCC region still maintained a high share of volume at 19%, delivering an overall 3.02 million travellers to Dubai. This 4 percentage point decline in GCC share was, however, effectively countered by year-on-year increases in tourist volumes from all other regional source markets except Australasia.

The South Asia region, in third place, contributed an 18% share of over 2.8 million visitors, up a strong 10.6%, followed by the Middle East and North Africa (MENA), and North and South-East Asia regions in joint fourth position, each contributing close to 1.7 million visitors and independently commanding 11% share, the former recording a 3.2% increase and the latter, an impressive 23.6% over 2016 visitation figures.

Underscoring the successful delivery of its diversified market strategy, Dubai’s regional mix saw the biggest year-on-year gain of 51.8% from the Russia, CIS and Eastern Europe block, contributing more than 1.1 million visitors and representing a share of 7%; the Americas with a 6% share made up of just under 1 million visitors, up 7.7%; the Africa region with a 5% share made up of more than 780,000 travellers, up 6.7%; and finally Australasia with a 2% share of overall volumes, with a total of just under 340,000 visitors.

“Dubai’s strong performance in 2017 can be attributed to the effectiveness of Dubai Tourism’s three-pronged strategic framework, focused on market diversity, agility and personalisation in outreach, and continuous proposition evolution. Through the past year, our numbers demonstrate our growing destination appeal and competitiveness, mitigating single-market exposure – none of which would be possible without the strength of our partnerships across the government, public and private sectors. Going forward, this commitment to collaboration across our tourism ecosystem stakeholders is crucial as we work towards our shared goals,” says Almarri.

Supporting the city’s priority agenda to always offer something new, unique and world-class to every global traveller, 2017 saw further strides made in broadening Dubai’s appeal to a wide spectrum of visitors. The city’s newest beachfront district, La Mer, opened to provide families with a new hotspot for dining, playing and unwinding, while Etihad Museum was inaugurated to give the culturally curious an enriching overview of the birth of the UAE and the fathers of the nation.

Continuing to enhance Dubai’s attractiveness as a global shopping destination following its launch in December 2016, Dubai’s Retail Calendar saw both traffic and engagement across the 12 months of shopping-related festivals, promotions and seasonal offer periods, mega-sales and clearance events, exclusive retail experiences and activations.

Among the openings towards year-end were Dubai Frame and Dubai Safari, both already proving to be popular and the former generating the most impressions ever seen on Dubai Tourism’s Instagram page.

New destination offerings coming online in 2018 include sections of the Dubai Historic District, giving visitors an immersion into the rich history of the emirate, glimpses of how people used to live and work and traditions and customs that remain to this day. Enhancements will also continue to be made to the compelling outdoor lifestyle offering in Hatta, which is rapidly becoming a hotspot for thrill-seekers and nature-lovers. To add to the mix is UAE’s first national park, Al Marmoum, which launched at the beginning of 2018, providing an opportunity for tourists to interact, learn and appreciate the wildlife flora and fauna of the emirate.

Dubai’s hospitality sector also continued to make further strides in expanding its offering to match the evolving needs of visitors, both in terms of scale and breadth. By the end of 2017, a total of 107,431 keys were available across all hotel and hotel apartment establishments, representing a growth of 4% on the previous year.

“As we work to establish Dubai as the most recommended city in the world, our focus is firmly on driving advocacy as a key component of our strategy towards sustained tourism growth. Assisted by comprehensive systems for monitoring and gauging traveller sentiment with regard to every aspect of the Dubai experience, our priority is to continuously build on our performance, making the necessary adjustments and improvements across all areas to guarantee the satisfaction of our visitors and ensure they become positive and active ambassadors of our city,” Almarri concludes.