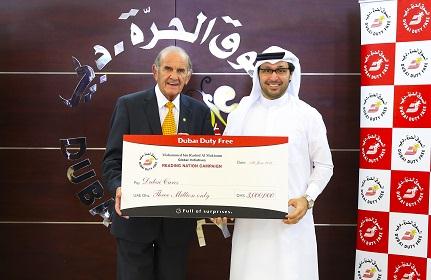 The Dubai Duty Free (DDF) has donated AED3 million towards the Ramadan ‘Reading Nation’ campaign, launched by HH Sheikh Mohammed bin Rashid Al Maktoum, vice president and prime minister of the UAE and ruler of Dubai. The Ramadan Reading Nation campaign is aimed at providing five million books for children in refugee camps and students in under-privileged schools across the world.

“This first-of-its-kind Ramadan campaign complements the previous initiatives launched by His Highness Sheikh Mohammed over the past years and conveys a message of benevolence and peace from the UAE to the world during the holy month of Ramadan. We are honoured to partner with this campaign in line with our commitment to social responsibility principles that contribute to the UAE’s goal of extending a helping hand to those less fortunate – no matter where they live and who they may be,” says McLoughlin.

The Reading Nation campaign will continue until the 19th day of Ramadan, which coincides with the Emirati Humanitarian Work Day and the anniversary of Sheikh Zayed bin Sultan Al Nahyan. The campaign will see two million books to be provided to children and students in refugee camps, with 2,000 libraries to be built around the Islamic world. The libraries will also be provided with two million books. In addition, the campaign will support the foreign educational programme of the Emirati Humanitarian Organisations by donating a further one million books to this cause.