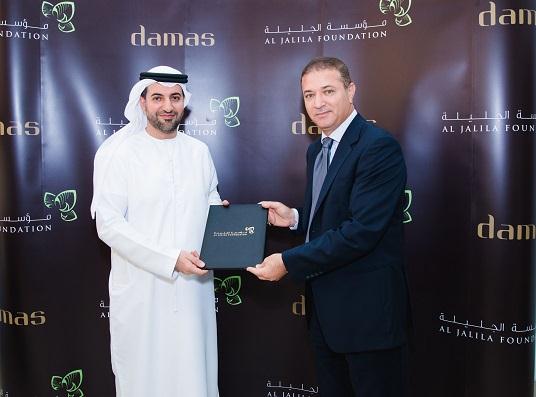 Middle East’s leading jewellery and watch retailer Damas has announced its exclusive partnership with the Al Jalila Foundation, a UAE-based philanthropic organisation founded by Sheikh Mohammed bin Rashid Al Maktoum, Vice-President and Prime Minister of the UAE and Ruler of Dubai, to position the nation at the forefront of medical innovation.

The partnership agreement was signed last week by Dr. Abdulkareem Sultan Al Olama, the CEO of Al Jalila Foundation and Anan Fakhreddin, the CEO of Damas. Under the agreement, Damas commits to support the Foundation’s medical research aspirations for one year commencing September 2014.

The partnership will include several joint campaigns, commencing with the sale of a unique piece of jewellery inspired by Al Jalila Foundation’s ‘Key of Hope’, which was first presented to Sheikh Mohammed at the official launch of  the Foundation in April 2013. The Key embodies the Foundation’s pledge to unlock medical advancements for a healthier society, and to deliver on Sheikh Mohammed’s vision to transform the UAE into one of the leading countries in the world.

“At Damas, we believe in the importance of medical research and through the years it has become a priority for the UAE as it continues to move towards a knowledge-based economy and aims to become one of the world’s top nations by 2021. Al Jalila Foundation has been a significant contributor to the advancement of local medical capabilities since its inception and, as a UAE company, Damas is proud to be establishing an ongoing commitment to such a noble community endeavour,” says Anan Fakhreddin, CEO of Damas.

“We are encouraged to see more corporates stepping forward to support medical research in the UAE. As a Foundation, we rely on the support of the community to help fund life-saving research to improve the nation’s health. 100% of the donations we receive are used to fund our programmes directly. We thank Damas for their commitment and the creativity they bring in support of medical research,” says Dr Abdulkareem Sultan Al Olama, CEO, Al Jalila Foundation.