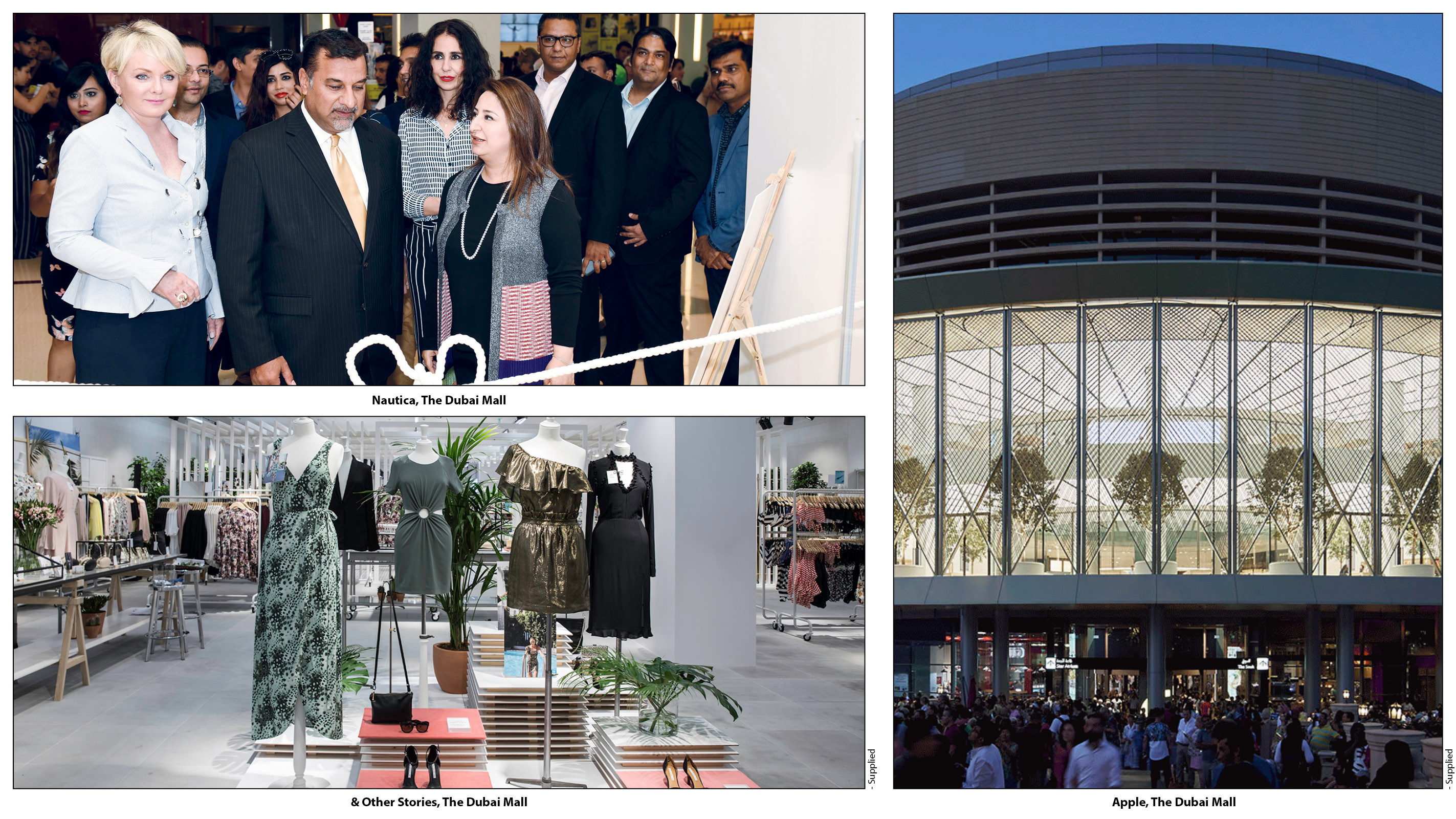 The Dubai Mall had a busy April. Brand launches, and re-launch, kept the shopping mall buzzing. While Apple opened its third store at The Dubai Mall – after Mall of the Emirates in Dubai and Yas Mall in Abu Dhabi – it also saw the launch of H&M Group’s fashion and lifestyle brand & Other Stories in the region. What’s more, Nautica re-launched its store at the mall in collaboration with a new franchise partner, the Apparel Group.

“We view our store as a modern-day town square, where visitors come to shop, be inspired, learn or connect with others in their community,” says Angela Ahrendts, senior vice president of retail, Apple. “And what better place to come together than overlooking Dubai’s epicentre where the Dubai Fountain, Burj Khalifa and The Dubai Mall meet. We are so honoured to have a home at one of the world’s most incredible and dynamic intersections.”

Spread across two levels, the new Apple store boasts a 186-foot curved storefront enhanced by a glass façade. Offering stunning views of the Burj Khalifa and the Dubai Fountain, its doors that can stand open permanently to allow air to flow directly into the building. According to Ahrendts, doing this was challenging considering the hot weather, but it was an “incredible opportunity.”

The glass façade, designed by Foster + Partners, features 18 37.5-foot-high motorised ‘Solar Wings’ – inspired by the traditional Arabic Mashrabiya – that respond to the UAE’s ever-changing environmental conditions. Each solar wing is locally fabricated from 340 carbon fibre reinforced polymer rods, and at 180 feet wide, the 18 panels make up one of the world’s largest kinetic art installations.

To enhance the customer experience Apple has launched what’s called ‘Today at Apple’ sessions, which will offer individual advice and training to customers – in areas including photo and video, music, coding, art and design and more – to enhance their creative skills using an Apple device.

& Other Stories now in Dubai

Swedish fashion brand & Other Stories, launched by the H&M Group in 2013, has forayed into the region with its first store at The Dubai Mall, which will be followed by a second one in Doha.

The Kuwait-based MH Alshaya Group is the brand’s franchise partner, which also operates H&M in the region.

Originally conceived as a beauty brand, fashion and accessories soon became part of the & Other Stories’ portfolio. Currently it operates three design centres in Paris, Stockholm and Los Angeles, where everything from product to store design as well as campaigns are done in-house.

& Other Stories launches two main collections – Paris and Stockholm. The Paris collection is playful and feminine with bright prints, colours and frills, while the Stockholm collection is more structured and tailored, primarily with a monochrome and a neutral palette

Alongside fashion and accessories, The Dubai Mall store will also feature a newly launched stationery collection.

“The re-launch at The Dubai Mall was spurred by the change in partnership. We felt that there was a need to get out of certain locations that may not have been brand appropriate. Some commercial centres become obsolete over time,” says Canavan.

Nautica, established in New York City in 1983, currently has 12 stores in the GCC and is aiming to add another 18 stores in the next five years, she shares.

“There would be two more store openings this year in the GCC. One of the locations we are looking at is the Avenues Mall in Kuwait, while the second is in Jeddah. Together with the Apparel Group, we have overhauled the flagship store at The Dubai Mall. We are reintroducing the brand in various ways and as a new retail concept in Dubai,” Canavan elaborates.

Huqqa & The Market now at The Dubai Mall

Time Out Market to come to Dubai