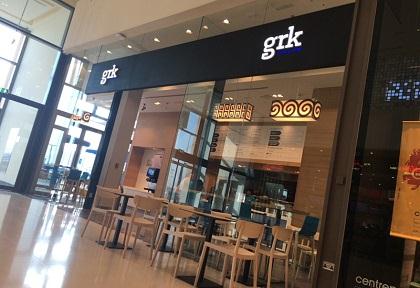 UAE-based Landmark Group’s F&B division Foodmark has brought the first GRK Fresh Greek restaurant outside the US to the recently opened City Centre Me’aisem in Dubai.

Foodmark has been working on the launch of the brand in the region over the last year after entering a master franchise development agreement to develop GRK Fresh Greek across the GCC. As part of the agreement, the first five restaurants are expected to open across the UAE by the end of 2016.

“Through brands like GRK Fresh Greek we’re able to appeal to a broader customer base which is more discerning and demands higher quality, while still relying on the convenience provided by traditional quick service restaurants,” says Vikram Noronha, COO of fast-casual concepts at Foodmark.

“From a strategic standpoint, this has allowed Landmark to diversify its restaurant offering to expand into a rapidly-growing restaurant segment and creating a wider variety of options in the market.”

“We are thrilled to be in Dubai as part of our efforts to bring authentic Greek food to the world. Our expansion in this region is not just a new twist on sharwama or gyro; we are introducing Yeeros,” adds Marino Stratigakis, director of operations GRK US. “Consumers are increasingly demanding healthier, higher-quality fresh foods. GRK offers the benefits of the Mediterranean diet through traditional Greek cooking in a fresh and fast casual setting.”

First opened in New York in 2012, GRK has expanded to three stores in the US, with plans to extend to a further eight stores over the next two years.